Though LEGOs are cool as heck the unfortunately reality is that they are a mess. This issue has become acute the past few weeks while balancing the frustration of mess and disorganization while trying to build stuff. More time can be spent digging through LEGOs as actually building cool stuff with them. Fortunately I found a post on the web that’s helping me, and my patient wife, cope with this issue.

An evil mad scientist with a blog goes through pros and cons of several LEGO taxonomic methods designed to mitigate frustration. My personal favorite is 1×1 storage block (below). Hopefully it will help you organize your messy hobby. 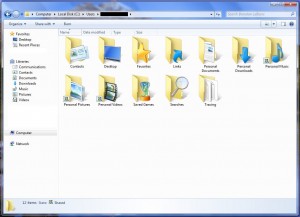 I like to keep my user profile file separate from my system drive in case my hard drive crashes or I need to reinstall Windows. This used to be a tedious and difficult process until now. I found a good step-by-step tutorial that explains how to do it. You need to have some advanced knowledge of Windows 7 and it should be no problem for the average Power User, unless you are afraid of the Registry.

A couple months ago I was stressed out and needed a hobby. It occurred to me that downstairs, in my garage, was a gigantic tub of Legos. It was a big tub and one night, while my friend Pete was over playing video games, we went downstairs and dragged the tub upstairs. This box was filled over a decade ago as I was moving my stuff out of my parents house. We popped and open and inside were thousands of Legos. I had managed to hold on to my Lego collection that I had accrued as a kid from 4 to ~12 (when Legos became lame). Also inside was a New-in-Box Generation 1 Transformer, but that’s another story.

My kick-ass wife, who volunteered, helped me sort the jumble of Legos into some sense of order. We managed to consume a weekend laboring, sorting the bricks. It actually turned out to be good quality time. There were many themes; the castle, pirate, and boats where eclipsed by the space and town themes. Then occurred to me, it was time to rebuild.

Unfortunately I didn’t save the directions, but thanks to the magical Internet, I found a site, Worldbricks.com, that saved the day. They have Lego instructions going back to at least 1955. Based on my memory and what I think I saw in the piles I identified at least 45 different sets.

Then I got on Ebay and start poking around. The memories from hours of staring at catalogs came flooding back so I picked up several more sets to round out my collection. Ebay is also an excellent place to pick up spare parts.

I didn’t have all the parts, but I had many, and pictures of the ones I rebuilt are below. Notice the big Space Shuttle model. I couldn’t help it so Suzanne and I went to the Lego Store in Lawrenceville and I got a big-boy set with a mere 1204 pieces, definitely my favorite.